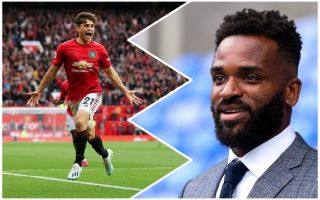 The ex-England international tells Football Insider he is amazed by just how much playing time the young attacker is getting so soon after his summer switch, having initially expected him to come in as a backup option in the first-team.

But when we covered the confirmed Manchester United squad for the season earlier today, it was noted how light the Red Devils are in attack following the departures of Romelu Lukaku and Alexis Sanchez, so James’ game time shouldn’t come as that big of a surprise though perhaps the jump from Championship to Premier League enhances that.

The 21-year-old has featured in all of United’s games (4) so far this season, scoring three goals.

Bent told Football Insider: “He’s now turned into Man United’s main man. When he went there, I’m telling you now, he wouldn’t have expected to get as much game time as he’s getting at the minute.

“Now it’s a case of he’s the guy, if he doesn’t score, they don’t score. He’s direct, he goes past people. For Dan James, what a fairy-tale story, he’s gone there and been absolutely amazing.

“You always knew he’d do well but you wouldn’t think he’d be as potent as he is now. I thought he’d maybe coming on as a sub, backing up Martial, backing up Rashford. He’s taken his chance and every time he scores a goal, it seems to be a worldie.”

James made 39 appearances for Swansea before joining United. In those games he scored six goals and chopped in with 10 assists.

Moreover, the Wales international is up for United’s award for player of the month (August).