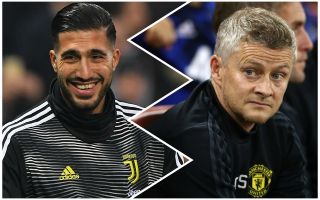 That what my initial thought after seeing tweets from Manchester United fans suggest former Liverpool midfielder Emre Can would make for a good January signing.

Currently at Juventus, the Germany international is not happy about being omitted from the Italian side’s Champions League squad.

Juve manager Maurizio Sarri has decided against involving Can amongst his midfielders, unlike summer signings Aaron Ramsey and Adrian Rabiot — both whom arrived on Bosmans this summer — clearly pushing the German down the pecking order.

Can is quoted as telling journalist Kerry Hau: “I am shocked and angry. Last week, the club promised me something else, yesterday the coach called me and told me in less than a minute that I was not in the squad. I can not explain it, I have not been given any reason.”

Aged 25, had he known he wouldn’t be involved in the Champions League with Juventus this season, Can could have easily pushed for a transfer elsewhere.

Last season he made a total of 37 appearances for the Serie A champions, but the majority of those were from the bench.

But these fans United below clearly feel Can could strengthen the midfield at Old Trafford but he’d have to accept a drop to the Europa League, and it doesn’t look like the Red Devils will be returning to the Champions League anytime soon.

Emre Can would be a decent CM imo, He scores goals good technique, Good passing qualities and would come “cheap” and since @ManUtd are now Cheap, they should consider bringing him in January, and Bruno Fernandes as well but they won’t,they’re not shrewd #MUFC

How about United getting this guy in January to boost our midfield, at least he’s better than the likes of Periera Lingard and McTominay #Mufc

would literally take Emre Can only if he does something to piss off scouse scum and he shows his desire to play for united if it happens. good holding Cdm not world class but goodness me with our situation i would take average. if we got Marchisio aswell as a free agent.. #mufc

Ole should bid for Emre Can in January… He will be a good signing. @Mufc_Info what do you say? https://t.co/hi8fvPPUg0

Juventus can afford to exclude Mario andzukic, Emre Can and Chiellini out of their Champions league squad. All of them would make Manchester United’s first XI. Amazing depth. #MUFC

Emre Can @ManUtd ??? What you reckon? #mufc_family would you have him at Utd! #MUFC