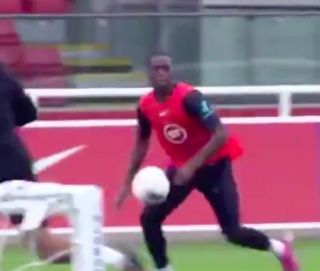 Aaron Wan-Bissaka is training with England after being given his first international call-up by boss Gareth Southgate.

The 21-year-old has replaced Manchester City right-back Kyle Walker in Southgate’s 25 man squad, after an impressive start at Manchester United since his summer move from Crystal Palace.

Wan-Bissaka will be hoping to get the opportunity to make his first England appearance, as the Three Lions take on Kosovo and Bulgaria in the qualifiers for the European Championships in 2020.

England have strength in depth in the right-back position and Wan-Bissaka will be battling it out with new Atletico Madrid signing Kieran Trippier and Liverpool’s Trent Alexander-Arnold in the role for the upcoming games.

He is already becoming a firm fans favourite at Old Trafford and is making the right-back position his own under Ole Gunnar Solskjaer.

Wan-Bissaka posted a highlights video of himself in action training at St George’s Park.