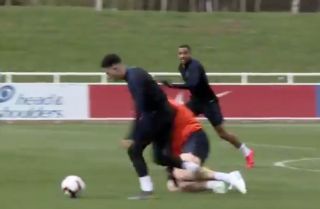 Harry Maguire was sent to the shops during England’s training session this morning when turned by Borussia Dortmund starlet and Three Lions team-mate Jadon Sancho.

The English winger has been strongly linked with a move to Manchester United in the past, and in a recent interview he left the door open for a return to the Premier League, as per The Sun.

It’s no secret this season that United are lacking in quality up front. Ole Gunnar Solskjaer’s men are not putting teams away and a player of Sancho’s ability would be a welcome addition on the right.

Just ask our new signing Maguire who today was left looking a little embarrassed as Sancho put him on his arse in England training, as seen below:

Jadon Sancho vs the most expensive defender in the world.

If he can leave defenders for dead like that on a regular basis, Solskjaer ought to be demanding his signature next summer.

United is still one of the most appealing football clubs for young players, although it’s hard to see Sancho leave Dortmund for a club not competing in the Champions League.