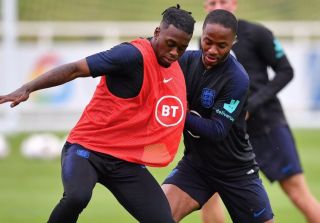 England take on Kosovo and Bulgaria in the coming days as a number of players leave their clubs for the first international break of the 2019/20 season.

Aaron Wan-Bissaka makes his debut call-up after a bright start to his career at Manchester United following his £45m summer transfer from Crystal Palace, as per The Guardian.

The 21-year-old appears to have replaced Manchester City’s Kyle Walker in Gareth Southgate’s 25-man squad, a mainstay in the team for the last World Cup. He will be hoping to make a good impression whilst away with the Three Lions in order to keep the City full-back out of the squad long-term.

Southgate also has Kieran Trippier and Trent Alexander-Arnold to select from at right-back.

To mark the occasions of his first day training with England’s senior team, Wan-Bissaka uploaded a photo to Twitter with City winger Raheem Sterling trying to contest him for the ball.