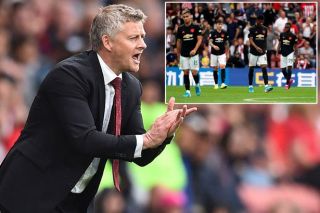 Manchester United’s start to the season had so much promise after the opening day demolition job of Chelsea at Old Trafford, however, since then they have only managed to pick up a disappointing and frankly dismal two points from a possible nine.

Given the chances they had in the three games since beating Chelsea, United should have picked up at least six points with the exception of those three games being Palace at home, as reality is, they didn’t do anywhere near enough deserve to win the game.

The reasons as to why United’s downfall in recent games is simple and has been pretty much the same old story throughout each game. Ole’s game management has been awful, his inability to read the game and failing to recognise and make much needed changes has been non-existent. While Ole needs to work on himself, I can concede the he’s not fully to blame, but he can at least try to put an end to it by doing some very easy and simple.

Performances and efforts from so-called senior players have been nothing short of pitiful and while I fully understand that Ole cannot control the performance and effort of players, one thing he can do is not allow it to continue any further. How Ole can do this is very simple, drop those guilty of not putting in performances and make it harder for certain players to walk into the team week in, week out and call them out!

Admittedly, squad depth and strength in numbers isn’t a something Ole has at his disposal but something that he does have is a group of talented young players that are more than capable of putting in the effort and potentially surprising a few with their potential performances, something that like I said, is not what we are seeing from a number of first-team players.

These seven players have consistently proved time after time why they are deserving of a chance to shine in the first-team squad with their performances in the Under 23’s. While Tuanzebe, Chong and Greenwood have been involved with the matchday squad in recent weeks and a handful of times last season, Ole is still yet to give them a legitimate chance.

The reasons to exactly why we are in the mess we are in, is because Ole hasn’t and won’t change his approach towards favouritism and name. This is something that can no longer continue, as we all sure as hell know that United need fresh, young and hungry talent and while a big focus is on buying it in, he is missing what is right in front of him!

In recent weeks we have seen Victor Lindelof turn shakey despite a solid performance against Chelsea. This is where Tuanzebe can be utilised, and linking up next to a player like Harry Maguire will do nothing but bring the best out of him. Tuanzebe was key to Aston Villa’s return to the Premier League so competitive football at senior level and the stature of the league will not faze him.

United also have an issue at left-back with the injury to Luke Shaw. Ole has called upon a player in Ashley Young who we all know is no longer capable to play in this league and certainly doesn’t suit Ole’s system. This was backed up against both Palace and Southampton where he was constantly exposed for being too slow and turned inside, left to dry. This issue is easily fixed, you bring in a player in Brandon Williams, who is young enough to learn the system and talented enough to be able to handle the pressure of tricky wingers and wing-backs. Something that he does every week at youth level.

The biggest weakness that we have all come to agree on is the midfield, United’s midfield at the moment picks itself and it shouldn’t be the case. Scott McTomniany who had a solid pre-season and a decent start to the season has faded out, Paul Pogba doesn’t want to be here but arguably you cannot drop him. That would be where Garner and Gomes come into the frame, and I can honestly say, it would bring nothing but positivity.

All summer long we cried out for a CDM and a partner for Pogba, something of which the board failed to provide us with but instead of dwelling on it and going with what he has, Ole must simply introduce Garner into the CDM role and slot Gomes into the 10. Garner has the passing ability that United have not seen since the days of Paul Scholes, his composure on the ball is also something quite remarkable, Ole cannot allow him to sit out any long!

As for Gomes, Ole needs a player who is a creative spark to link up with his striker, the midfield and the wingers but not only does he need to link up with those players, he needs to have the ability to run and challenge the opposition’s back four. In Angel, Ole will get this more than he does from the likes of Jesse Lingard and Juan Mata, so why is he failing to see this? It’s probably the most crucial change he needs to make and Ole must make it happen.

The final two players of this young and talented group are Chong and Greenwood, both of whom have been named on the bench so far this season and most probably should feel the most disheartened by Ole’s failure to recognise change. Chong is a tricky, fast and direct winger who does more than just run at the defence, he has the ability to find the final end product whether it’s a cross or deft pass. Chong would also solve the set-piece issue that has see us fail with time after time with Rashford. Arguably, the form of Daniel James is denying him a chance but Rashford’s too comfortable in getting into the team. Make him sweat and earn his place rather than let him feel no challenge for his place at all.

At the start of the season, Ole described Mason Greenwood as the ”best natural finisher” at the club and while I can honestly believe it, we are not seeing it! Greenwood’s ability to add more killer instinct and final product to the team is clear as any other player than you can name in the squad, yet Ole is only feeding him scrap time, this has got to stop. In Greenwood, you get a player who isn’t afraid to take a shot, isn’t afraid of finding a teammate and linking up play but for some reason unknown to man, Ole isn’t seeing it as we are.

It’s obvious what ole needs to do and if United are to stand a chance at making it into the top six then the changes mentioned is the first place he should start. Ole out at this stage shouldn’t even be a statement we see but the longer he continues to allow piss poor performances from first-team players and continues to sympathise with unacceptable efforts, the longer he fails to see that changes are needed, the more you have to question his ability to be the manager United need.

He now has two weeks to wake up and smell the coffee and make changes to his tactics and his approach to the game or United’s woes will continue and more damage to the club’s hopes of signing world-class players thanks to a top-six finish will disappear. It’s not enough to play off the clubs name to attract the type of players we need to bring in and while I concede that the youth might not live up to the hype, I feel we can all agree on this…

At least, we can be proud of their performances rather than witnessing the utter rubbish we have to watch week in, week out right now with the certain all too comfortable and lacklustre senior players we are seeing now.

It’s your move Ole, make it happen and change the way you manage the players or as a fan base, we are going to progress nowhere!