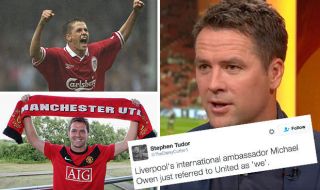 He may still be a club ambassador at Liverpool but that hasn’t stopped him hitting back at their fans who judge him for his stint at Manchester United in his new book, Reboot.

Owen reckons the supporters who no longer respect him are in a minority, calling them ‘delusional’.

And that’s not likely to go down very well…

Here’s the extract from the book, published in the Liverpool Echo:

“Not surprisingly, I get a huge amount of abuse from what I suspect is a minority of Liverpool fans who think that, because I played for a rival club, I shouldn’t even be a Liverpool ambassador in the first place!

“That, I’m afraid, is fan-centric nonsense. Not just that, when I trawl through my memory banks, recounting all the great moments I enjoyed with the fans and my fellow players, these opinions sting. My record at Liverpool is a good one. I won trophies there, scored goals, won two Golden Boots there and lifted the Ballon d’Or. I played for the club on two hundred and ninety seven occasions. I went in where it hurts for the club on countless more instances.

“How does playing for a rival club negate any of that? It doesn’t. To think that way is just delusional. And even worse, while fans are happy to question my credentials, you’ve got guys hanging around.

“In my daily life, I don’t shy away from going anywhere. I go to restaurants, pubs, racecourses, football grounds – I have done so for years and I’ll continue to. I can count on one hand the number of times that anyone has come up to me and given me a hard time about whatever football clubs I’ve played for, or been abusive about so-called loyalty, or challenged my views on this or that.

“In the real world it doesn’t happen. On the Internet however, it’s a total free-for-all.”

While we’d agree with Owen on Liverpool fans being delusional, he’s talking a lot of crap in his book about fans turning on him for joining a rival club.

He knows exactly how heated the United-Liverpool rivalry gets… so it’s baffling that he seems surprised or singled out for such abuse.

Moreover, Owen has previously claimed he was desperate to return to Liverpool from the day he left the club in 2004 to join Real Madrid. The former England striker says in Ring of Fire, a book by Simon Hughes about Liverpool players in the 21st century, that he didn’t want to leave Anfield at all and he had hoped to return after a year in Spain.

“At every stage – every summer – I was on the phone to Carra telling him to find a way to get me back,” Owen said.

“’Does Rafa want me?’ I’d say. ‘Does Kenny want me? Does Brendan want me?’ It was circumstance that stopped it happening. Whenever I was available, Liverpool had too many strikers. And when Liverpool wanted me, I was injured. By the end, I wasn’t the player I had been before and they simply didn’t fancy me. I wasn’t good enough.”

He went on to join Newcastle in 2005 and United four years later.

There were many reasons for Owen joining United though, such as playing under Sir Alex Ferguson and to win the Premier League title. He can boast about his league winners’ medal when at LFC ambassador events knowing none of the other f*ckers have one.