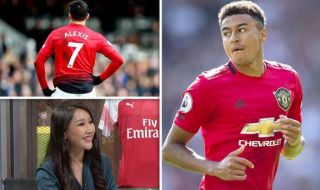 Jesse Lingard has not requested the Manchester United No. 7 shirt despite reports stating otherwise.

According to Stadium Astro presenter Michelle Lee, the midfielder asked for the shirt number following the departure of Alexis Sanchez.

“Apparently Jesse Lingard, I don’t know if you believe it, he has requested the No.7 shirt,” she said, as quoted by the Express.

However, those claims have been rubbished by the Manchester Evening News.

The Express also ran quotes from former United striker Louis Saha, who is not convinced Lingard is the right man to wear the iconic no.7.

“Hang on a minute,” Saha replied.

“I mean, no disrespect, Jesse’s a player from the academy and he’s been there a long time, he understands.

“You can’t take that lightly, it’s not just about you thinking that you have the potential.

“I don’t think that he done it seriously.”

Well, it doesn’t look like Lingard did request it after all so it has to be questioned where Lee received her information.

The No.7 has been worn by the likes of George Best, Eric Cantona, David Beckham and Cristiano Ronaldo at Old Trafford – but recent players who have worn the shirt were underwhelming.

Lingard hasn’t been performing great of late, failing to contribute a single goal in the past eight months, so to give him such an iconic shirt number all of a sudden wouldn’t go down very well.

The England international should now look at improving his game rather than getting a new shirt number.