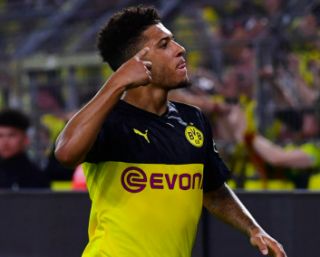 Borussia Dortmund winger Jadon Sancho has left the door open on a return to the Premier League.

The 19-year-old has become one of the most exciting talents across European football during his time in Germany, after leaving Pep Guardiola’s Man City two seasons ago.

Sancho scored 12 goals and contributed 14 assists for Dortmund last year in a breakthrough season for the youngster.

He is also now an established member of Gareth Southgate’s England squad, becoming a regular first-team starter due to his consistent stand-out performances in the Bundesliga.

Sancho had been linked with a move to Man Utd this summer and the Sun reported that he is being prioritised by the Reds this January.

It’s clear to see why Ole Gunnar Solskjaer wants Sancho; he is a tricky right-winger with potential to become one of the best in the world, in a position of weakness for United.

Speaking out about his future, Sancho said he ‘wouldn’t mind’ a move back to England.

“I can’t tell the future but I wouldn’t mind (returning to the Premier League),” Sancho said as quoted by Manchester Evening News.

“La Liga I wouldn’t mind also, but we don’t know yet. I feel every league is very competitive. The Premier League is one of the best leagues in the world, everyone knows that.”

Sancho will undoubtedly command a huge fee if he becomes available next summer, and will be coveted by a host of top European clubs.

The chances of Manchester United signing him however, do seem bleak given the youngster will want to continue to play Champions League football and it looks  increasingly unlikely that the Reds will qualify for the competition this season.