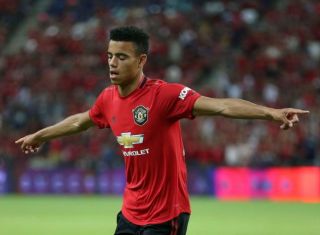 That’s according to the Athletic, who claim the 17-year-old could earn around £25,000 per-week plus playing bonuses.

The report says Greenwood signed his first professional contract at Old Trafford in October amid interest from Bundesliga sides, but there is an understanding that the deal will have to be renegotiated given his growing importance to Ole Gunnar Solskjaer in the first-team.

NEXT:Video: Lukaku explains why he is delighted to reunite with ex-Man Utd teammate at Inter

Ole Gunnar Solskjaer has said Greenwood is due more opportunities in the first-team, after his remarkable performances for the academy sides last season.

The youngster is regarded as the one of the most talented players to come out of the academy and there are high hopes for him at the club.

Alexis Sanchez and Romelu Lukaku’s departures this summer mean United are extremely light in attacking options, giving Greenwood the chance to impress as an understudy to the underperforming Marcus Rashford and Anthony Martial.

It’s likely that Greenwood will be given chances to start more regularly when the Europa League group stages begin at the end of this month and when the Reds start their League Cup campaign.

It’s great news to hear Greenwood is expected to put pen to paper and commit his future to the club.