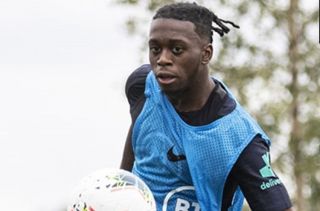 Aaron Wan-Bissaka has withdrawn from Gareth Southgate’s England squad with a back injury, the Football Association has revealed.

Southgate included the Manchester United right-back in his 25-man squad for upcoming internationals against Bulgaria and Kosovo.

It was Wan-Bissaka’s first call-up for the senior Three Lions squad, so it’s a shame he won’t be able to make his debut this time around.

He deserved his call-up too, easily being one of United’s best players during their first four league matches of the new season. Wan-Bissaka’s inclusion meant Manchester City full-back Kyle Walker was dropped from the squad.

No replacement has been lined up for AWB.

“Aaron Wan-Bissaka has withdrawn from the England squad,” a statement read on the FA’s official website. “The Manchester United right-back has returned to his club due to a back issue.

That comes as another kick in the teeth for Walker, who now must be out of Southgate’s plans due to AWB’s emergence at Old Trafford.

According to WhoScored, AWB has completed more tackles and interceptions combined (30) than any other player in the Premier League.

The former Crystal Palace right-back had a terrific breakthrough season last term but Southgate had not made the call until now, for him to represent his country at the highest level.

England are well-stocked in the right-back department, though Southgate has been known to play three at the back with wing-backs instead. It remains to be seen what his plans are for AWB once fit.

For United, we can only hope what injury sustained by AWB doesn’t leave him out for a long period.

Luke Shaw is currently out injured at left-back and Ole Gunnar Solskjaer has already called on Ashley Young to fill the void, which is far from ideal.