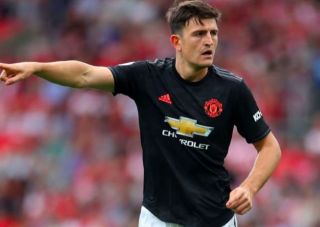 Gary Neville says he did not understand why Manchester City didn’t pursue Harry Maguire as a replacement for captain Vincent Kompany this summer.

Maguire eventually signed for United for a reported £80m, despite reported initial interest from City.

However, as quoted by BBC Sport, Guardiola said he could not afford Maguire after the Community Shield at the beginning of August.

NEXT:What getting to the Europa League games will cost Manchester United fans

It seems improbable that City could not afford the transfer fee of Maguire given their spending power and the consistent outlay on their defence.

And United legend Neville thinks Maguire could have replaced the huge loss of Kompany.

“I said a few weeks ago that I was struggling to understand why City didn’t follow through on Harry Maguire with Vincent Kompany leaving the club,” he said as quoted by Manchester Evening News.

“I thought Kompany won them the league in the last 10 matches of last season when he played in all those games. Forget the Leicester moment which was just spectacular, I thought his leadership held them together at a time when Liverpool were applying pressure like you wouldn’t believe.

“In terms of that leader-type figure, I think Laporte has got that.”

City are yet to learn the full extent of Laporte’s injury sustained in the home win against Brighton on the weekend, but it looks serious.

Guardiola’s side could be left short in central defence, but have England international John Stones waiting in the wings as cover for now.

Maguire, meanwhile, has settled into life well at Old Trafford and is the calming presence Ole Gunnar Solskjaer has needed at the back.

Despite a poor run of results early on, Maguire has still been one of the stand-out players and it would be interesting to see a partnership between him and youngster Axel Tuanzebe at the back.