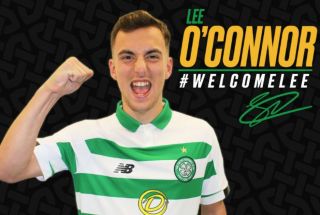 The defender has come through the youth team ranks at United since 2016 and while he never made a first-team appearances, O’Connor was called into the Ireland senior squad by former manager Martin O’Neill.

The 19-year-old told Celtic’s official website: “I found out last weekend about Celtic’s interest, and it went from there. Today was a bit hectic but I’m just glad to get it through before the window shuts.

“It feels surreal at the moment but I’m just looking forward to getting the international break over with and then starting with Celtic.

“I’m a versatile player. I can play anywhere across the back four or midfield if needed. I’d say that I’m a wholehearted defender. I love defending and tackling, but I like to get forward as well. First and foremost, though, I am a defender.”

O’Connor was considered a first team prospect at Old Trafford, and had been included in the Champions League squad last season.

He captained Ireland at the U19 European Championships during the summer, leading them to the semi-finals. Now O’Connor has been named as Stephen Kenny’s U21 squad for the upcoming qualifiers.

It is a bit surprising that United were willing to let the player leave on a permanent deal, but this could be a huge coup for the SPL champions, who are always on the lookout for promising Irish talent.

They will be hoping O’Connor is just that – and that he makes United regret their decision to let him go.