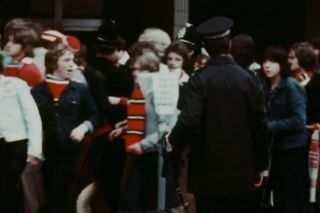 Aged 16, me and Paul Fennell hitched on the Friday night from Hendon on the slip road of the M1 in NW London and made good progress until we got to Scotch Corner, a truck stop on the A1 roughly 50 miles from Newcastle where we waited what seemed like hours.

Eventually a lorry took us straight to the ground and out we jumped, straight into a mob of crazy wild-eyed Geordies on the hunt for Reds.

We shook them off and found our way to a pub near Byker Bridge where other Reds were licking their wounds.

More and more arrived, the beer flowed and plenty of dutch courage was on show.

We decide to get to the ground in a tight mob — no running.

We hadn’t got 100 yards and they descended on us. It was a battle from then on. I was smashed on the back of the head with a scaffold pole and woke up in hospital, and in the next bed was a very well known red at the time from Wythy (GL) head bandaged, blood seeping through. We discharged ourselves and went back into the fray, but it had moved to outside the ground where for the first time we heard Glasgow accents and found out it was Rangers fans down to have a pop at us.

We couldn’t match up for numbers, let alone winning any battles.

Opposite end to the Leazes End (where we entered a year later but more of that another time) and we were surrounded and constantly attacked throughout the whole f*cking game.

My get out was to chat up a Geordie bird (she liked my Cockney accent) and swan off with her, step by step, yard by yard.

After the game, it was every man for himself with Reds being chased everywhere by weapon-wielding nutcases.

Eventually made it to News Central and on to the rattler, but even then we weren’t safe, they swarmed onto the train as it was leaving the platform (mad c*nts) but this time, we had equal numbers and battered them.

It took about a month to heal from that one…

The following year was much better planned, but I still ended up in hospital.

Manchester United lost the game 5-1, with Bobby Charlton scoring the only goal for the Reds.