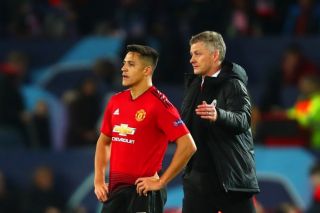 Alexis Sanchez has revealed he has no regrets about joining Manchester United, but had to leave the club due to a lack of playing time.

The Chilean has joined Romelu Lukaku at Inter Milan, signing a one-year loan deal at the Serie A club.

As reported by Sky Sports, there is no buy option in the Sanchez deal as there is a hope he can rediscover his form and have a successful loan spell to attract other buyers.

NEXT:What getting to the Europa League games will cost Manchester United fans

Sanchez insists he is glad he made the move to Old Trafford, despite a disastrous nineteen month spell.

“I’ve always said that. It’s the club that has won the most in England. When I went to Arsenal it was fantastic – I was happy there – but United were growing at the time, they were buying players to win something. I wanted to join them and win everything. I don’t regret going there.”

“I’ve always said to my friends I want to play,” Sánchez said. “If they [United] would let me play I’ll do my best. Sometimes I’d play 60 minutes then I wouldn’t play the next game and I didn’t know why,” he added.

In truth, it’s clear to see why the 30-year-old was not consistently selected after scoring just five times in 45 appearances at the club.

Sanchez had come with high hopes of a player that could finally justify being given the no.7 jersey, but other than perhaps a lack of confidence, his performances in a Red shirt have been unfathomably poor.

The 30-year-old will be hoping to resurrect his career at Inter, where he has now been handed the n0.7 shirt after the exit of Maruo Icardi to Paris Saint-Germain.