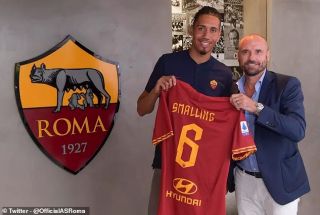 AS Roma were on the lookout for a new centre-back in the summer which prompted links to several Premier League defenders. The Italian giants settled for Chris Smalling who has left Manchester United on a season-long loan.

The England international lost his place at Old Trafford following the summer arrival of Harry Maguire from Leicester City. Manager Ole Gunnar Solskjaer decided not to name Smalling in any of his match day squads at the beginning of the season, preferring youth team graduate Axel Tuanzebe as his back-up option from the bench.

Understandably, Smalling was not willing to be a bit part player for United and has decided to move to the Italian capital in search of more game time.

READ MORE: (Video) How the news of Chris Smalling’s move to Roma was broken

Sport Witness have ran quotes from a TuttoMercatoWeb interview with football agent Giulio Meozzi, one of the intermediaries who worked on sealing a deal for the 29-year-old to move to Roma.

Giulio was full of praise for the defender.

“An important transfer,” he said. “There is a possibility of making a dry loan, with the option to keep for next year and that depends on his performances.

“Roma has done good business and has also been able to sell well. Smalling was an important operation just as that of Zappacosta.”

Smalling will link up with ex-United teammate Henrikth Mkhitaryan at the Stadio Olimpico, with the Armenian leaving Arsenal on the transfer deadline (September 2) for European clubs.

It’s unlikely that Smalling will ever get back into the United defence, but we still hope he does well in Rome.

Partner in crime Phil Jones still remains at the club but he has yet to feature this season.