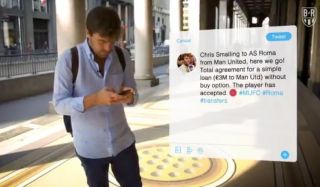 Once upon a time Mr. Romano wrote for Stretty News but his work now features on Sky Sports and The Guardian.

In a 10-minute video with Bleacher Report, Romano explains how he works as a football journalist trying to break news on a daily basis. The transfer window is a busy period for the media and we have come to rely on the more reliable journalists such as Romano for our news.

However, last week Chris Smalling joined Roma on a season-long loan and the video below shows how Romano received information on the €3m deal. It gives some insight into how the media works around football transfers.

His job is to reveal huge transfer news. This is how he does it.

He notes how there’s an extra appetite for news concerning Manchester United during the video.

It’s a shame he didn’t have to work on more incomings this summer for the Red Devils!