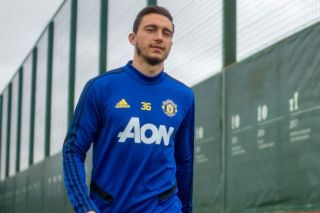 Matteo Darmian has signed for Serie A club Parma on a four-year deal. The transfer fee remains undisclosed but it comes as a relief to finally see the Italian move on.

The 29-year-old moved to Old Trafford when Louis van Gaal was in charge, joining United from Italian side Torino in July 2015.

Winning the FA Cup in his first season, Darmian went on to make 92 appearances for the club but only 7 of those game last season and he has not featured at all this term.

The Italy international’s contract was due to expire in 2020 but he now returns to his homeland a year earlier than initially planned, and his move comes after fellow defender Chris Smalling left to join Roma on loan while forwards Alexis Sanchez and Romelu Lukaku have both joined Inter Milan.

United boss Ole Gunnar Solskjaer had been willing to let Darmian leave all summer. He had been linked with a number of Italian clubs the past year or two but nothing materialised and he was left on the squad fringes with little to no game time.

Darmian will be playing more football now that he’s at Parma and he should be aiming to get back into the Italy set-up, with Ronerto Mancini currently in charge of the national side.