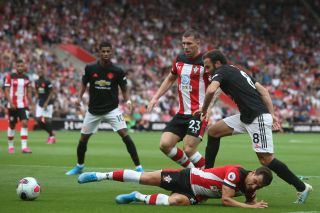 Juan Mata has been speaking highly of Manchester United team-mate Daniel James and has called for the Red Devils to make the Welsh winger the focus of their attacking play.

James is United’s top scorer in the Premier League this season, scoring three goals in four games after arriving from Swansea City in the summer.

The winger scored United’s only goal in the 1-1 draw with Southampton at the weekend. It gave the Reds a first-half lead but Ole Gunnar Solskjaer’s men were not able to build on that and conceded after the break.

Mata, who started his first game of the season against the Saints, has hailed the 21-year-old for his goal.

“He gave us a lot on the wing and even in the second half when everyone was a bit tired, he was still sprinting and giving very dangerous crosses.

“[I’m] very happy for him and hopefully he can do it many more times.”

Mata went on to urge Solskjaer and the coaching staff to focus the team’s playing style around James, given the blistering pace he brings to the side.

“Football is easier right, if you are that quick? He takes advantage of that.

“He goes one against one and it’s very difficult for the defender to take the ball off him. We need to use him even more.”

But Mata isn’t the only person at United happy with James’ work thus far.

Solskjaer also recently praised James for the impact he has made so far.

“He’s come in and made an impact ever since day one in training – [today] he made a recovery run, won the ball, went forward.

“I think he’s an example for everyone. He’s our top scorer, and that comes from his personality, his habits. He’s humble, he works hard and he knows he can improve.

“He knows he could have scored a few more [against Southampton] and we’ll work with him to get his quality even higher. Then we’ll have a top, top player.”

It’s early days yet you can see the talent James has in abundance. He’s not afraid to have a pop at goal and gets up time and time again when fouled by opposing players.