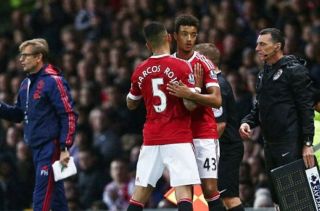 Manchester United have confirmed that defender Cameron Borthwick-Jackson has joined League 1 side Tranmere Rovers on loan for the season.

As reported by the club’s official website, the 22-year-old defender becomes the ninth player to leave Old Trafford on loan this summer.

Borthwick-Jackson has made 14 appearances for the first team since being handed a debut in 2015/16 under former manager Louis van Gaal. While the left-back’s career has stalled since then, he was rewarded with a new long-term contract following his breakthrough season. That deal is due to expire next year.

He was one of many youngsters at the time given minutes in the first team as Van Gaal did his best to deal with injuries. Tyler Blackett and Paddy McNair featured regularly.

BJ has already spent time on loan at all of Wolves, Leeds and Scunthorpe. The next chapter will be at Prenton Park and hopefully that opens up doors for the defender to move someone else permanently, with first team footballer on offer.

Manager Ole Gunnar Solskjaer has a wealth of options to choose from in defence, so we seriously doubt BJ would have featured this season had he stayed at Old Trafford.

Especially considering Ashley Young was preferred to BJ at the weekend when United were held to a 1-1 draw against Southampton.