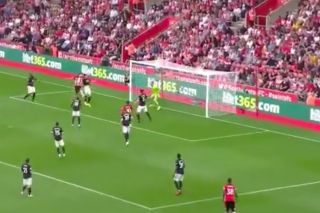 Southampton have scored a deserved equaliser against Manchester United at St Mary’s.

Most of the second-half action has taken place in the Reds’ half and the Saints eventually made their pressure count with the crucial leveller.

The goal came after Davis De Gea made his first save of the day, keeping out Danny Ings’ effort from a corner.

But it was far too easy for Saints full-back Kevin Danso to whip the ball back into Jannik Vestergaard who headed powerfully into the top corner after getting a run on United defender Victor Lindelof.

It was all too easy for Ralph Hassenhuttl’s side, who have looked far livelier in the second-half than United who have come out looking lethargic after the break.

Daniel James had given the Reds the lead thanks to a thunderous strike early on.

😇 Jannik Vestergaard with his first goal for Southampton.#SaintsFC get the goal their second half dominance deserves.

Turn on @NBCSN to watch the closing stages of #SOUMUN pic.twitter.com/5J1aSqkNJf

The Saints are level! 😇

Jannik Vestergaard towers above Lindelof to thump home a header…