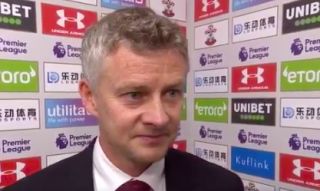 Ole Gunnar Solskjaer says Manchester United are enduring a ‘dip in results’, rather than a dip in form following their 1-1 to Southampton at St Mary’s.

The Reds failed to capitalise on playing against 10 men in the final 15 minutes after Kevin Danso was sent off, and are now without a win in three Premier League games.

It had been an encouraging start for the Reds after Daniel James opened the scoring with a thunderous strike, but Southampton looked the more lively side throughout, and deservedly equalised with  Jannik Vestergaard’s header following some lethargic United defending.

“We weren’t clinical enough. It is getting there though.

“The strange thing about it is the other games we haven’t won, we were better than the Chelsea one. I just hasn’t been clinical enough in front of goals. We should have won today, as well. It is not a dip in form, it is a dip in results.”

We’re still early on in the season, but the victory over Chelsea merely papered over the cracks and the problems at United are plain to see.

Solskjaer is lacking creative options to break down deeper lying defences and there is a lack of attacking quality to provide crucial moments in the final third to win games.