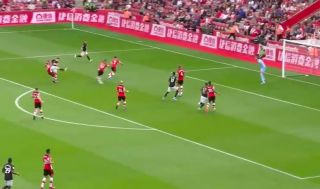 Daniel James has opened the scoring with a stunning strike against Southampton.

It was a sublime finish from the Welshman, who rifled home following a swift United counter attack.

Starting from the left, James cut inside following a pass from Scott Mctominay and struck an impossible shot into the top right corner past a helpless Angus Gunn in the Saints goal.

United had started as the second best team, with Southampton causing the Reds problems in the final third.

It’s the Welsh winger’s third goal already in the league this season, after strikes against Chelsea and Crystal Palace.

See the stunning effort below:

What a goal from Daniel James, this dude cost them 15m #SOUMUN pic.twitter.com/0J4hFXgkqv

Daniel James is on fire 🔥

The Welsh winger cuts in and finds the top corner with a beautiful strike!