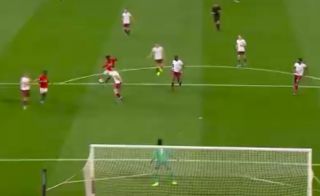 Angel Gomes scored a fantastic solo goal for United’s u23 side last night.

The 18-year-old opened the scoring  driving through the heart of West Ham’s midfield, before unleashing an unstoppable shot into the far left corner.

Neil Wood’s side had to settle for a point at Old Trafford as Largie Ramazani salvaged a draw late on.

Gomes had to be brought off injured late on after making another impact in the attacking midfield role. It is believed the youngster picked up an ankle knock and was therefore replaced by Dion McGhee with around 10 minutes left to play.

Many United fans were surprised to see Gomes’ selection last night, with the youngster knocking on the door of the first-team squad.

However, Ole Gunnar Solskjaer has again chosen to leave the 18-year-old out as the Reds travel to Southampton today.

Juan Mata is preferred in the attacking midfield role as Jesse Lingard is benched following a series of poor performances.

There could be plenty more of this to come, so make sure you tune in to #MUTV now for LIVE match coverage 👉 https://t.co/6tjkfj7o22 pic.twitter.com/Iiht2IyIbY