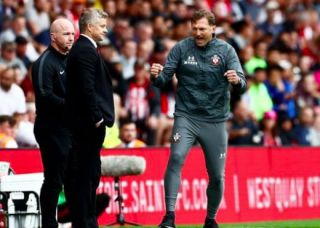 It’s been a miserable start to the season for Manchester United fans, after the promising opening thrashing of Chelsea which did little but paper over the gaping cracks under Ole Gunnar Solskjaer.

The Reds yet again failed to capitalise on a great opportunity to secure an away victory, as they were held 1-1 by Raul Hassenhuttl’s Southampton at St Mary’s.

Southampton had to play the final 15 minutes with 10 men after Kevin Danso was sent off after a ridiculous challenge on Scott McTominay.

The same problems with creativity remain, and United could not unlock the Southampton defence to produce the decisive chance they needed to secure victory.

The draw now means United have made their worst start to a Premier League season in the opening four league games since the 1992-1993 season under Sir Alex Ferguson.

This stat emphasises just how far the Reds are already off the pace in the league and the uphill battle Solskjaer faces for the Reds to finish in the targeted top four this season.

United have collected 5 points in the opening 4 games of the Premier League this season – their worst start since 1992-93 (four points). #mufc [Opta]