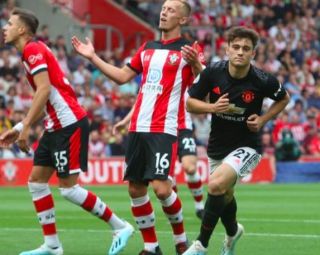 Diogo Dalot was not the only one who loved Daniel James’ opener against Southampton at St Mary’s.

The Portuguese defender reacted to United’s first-half efforts, and the stunning effort effort that gives United a lead.

It’s not been a great performance in truth so far or the Reds, who have often looked passive and let Southampton attack at will.

The Saints have not threatened with clear openings, but it’s been far from plain sailing for United, who must step up in the second-half to secure all three points.

See the full-back’s reaction below:

Daniel James is on fire 🔥

The Welsh winger cuts in and finds the top corner with a beautiful strike!