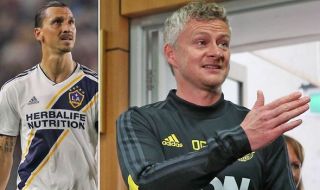 La Galaxy striker Zlatan Ibrahimovic said he would be open to a return to Manchester United when his contract ends in November.

“I could play easy in the Premier League, so if United needs me, I’m here,” Zlatan said, as per BBC Sport.

It was a tongue-in-cheek comment but with United’s shortage in attack it wouldn’t be the worst idea to take Ibrahimovic back until the end of the season. He scored 28 goals for the club in his debut season (2016-17) before suffering a bad knee injury, which ruled him out of the Europa League.

Ibrahimovic’s two-year contract was terminated early by mutual consent to allow him move to the United States for the latest chapter of his incredible career.

As expected, manager Ole Gunnar Solskjaer was asked about Ibrahimovic returning to United, at this morning’s press conference.

The United boss said, as per the Manchester Evening News: “If he was 28 not 38 it is a big difference. He had a great time here and he is still doing well. Who knows! He knows my number. If he is serious I’ll always talk to Zlatan.”

Solskjaer adds: “I don’t think that’ll happen, no. I think he has had his time at the club. I wouldn’t expect him to be serious.”

In what would be a shock move for both player and club, the dressing room would be given a huge boost if Ibrahimovic was to return. I always maintained that José Mourinho lost his way at United following the striker’s exit.

He was a leader amongst players and we don’t have enough players like that at the club currently.