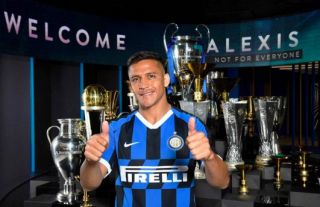 Ole Gunnar Solskjaer says it’s time for his attackers to ‘feel the pressure’ after the exit of Alexis Sanchez.

Sanchez has joined the Serie A side on a season-long loan deal, with United expected to pay up to £6m of the Chilean’s wages.

As per Sky Sports, there is no option to buy in the loan move as there is a hope at Old Trafford that Sanchez can rediscover the form that made him one of the best players in the Premier League.

The Reds could then demand a higher price at the end of the season if he is successful at Antonio Conte’s side.

Sanchez will join Lukaku as another player surplus to requirements at Old Trafford who has made the switch to Inter.

And Solskjaer thinks the move benefits everyone involved.

“I think Alexis needed to go,” Solskjaer said in this morning’s press conference as quoted by Manchester Evening News.

“It has not really worked out for him, for him as well. It will only benefit everyone.

“I’m trusting Marcus, Anthony, Mason to be our centre forwards. We’ve got loads of options and for me it is time for our boys to feel the pressure. It is something which we are looking forward to.”

However, what Solskjaer can’t deny is that his options are all young and inexperienced; Sanchez and Lukaku were the Norwegian’s most established attacking options and have both left Old Trafford without a replacement coming in this summer.

A risk has been taken in letting the pair leave as there is no lots of pressure on Marcus Rashford and Anthony Martial to deliver the goals in attack.

But it’s also a great opportunity for youngsters such as Mason Greenwood to take his chance as he will almost certainly get more first-team minutes when other competitions begin.