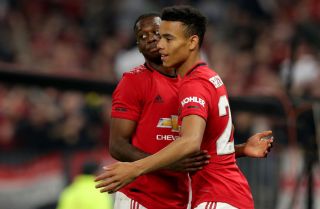 The teenager played a starring role for Manchester United during the pre-season tour this summer.

Now with Anthony Martial injured, fans may be about to see Mason Greenwood feature in more competitive games, though he has already appeared from the bench this season.

Pre-season is, of course, a time when football fans are inclined to get a little carried away at the glimpse of a new signing or promising youngster doing anything of note. With Greenwood, however, the hype is starting to feel justified and there are calls to see him start games in the Premier League.

Solskjaer explained Greenwood’s role for the season at this morning’s press conference, as quoted by the Manchester Evening News.

“Mason is not used to playing as little as he is,” Solskjaer told the press. “He is used to playing every week, now he is coming on for half an hour here and there. He won’t be expected to play five games on the bounce, he is cover and an option behind Anthony [Martial] and Marcus [Rashford].”

Greenwood is highly thought of at Old Trafford and everyone is excited to see how he develops as a Premier League player.

Ole has also confirmed his 3 strikers for the season ahead with Mason Greenwood as 3rd choice. 🔥

He earned comparison to United legend Ryan Giggs from Solskjaer over the summer, when a loan move away from Old Trafford was ruled out.

Speaking during the summer about the prospect’s plans for 2019-20, Solskjaer said (as per The42): “The kid’s only 17 and he’s learning every day training with these boys.

“He’s been with us the last few months, he’s grown in confidence, he’s grown in stature and, as I said before, when you’ve got players who perform it’s difficult to keep them out.

“But we’ve got to keep our feet on the ground with him, he’s only 17, there’ll be ups and downs but he’s enjoying his football.

“Mason’s never been on my mind to send out on loan, he’s one we have to keep at our place, keep him and play him when we feel it’s good for him and at the moment he’s fine.

“He reminds me a little bit about the Giggsy story, you can’t really send him on loan and for me he’s ready to be in this squad.”