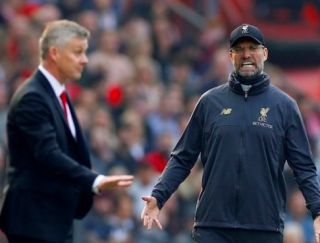 United’s clash against old rivals Liverpool has been rescheduled for Sunday 20th October.

The game will be shown on Sky Sports as part of their Super Sunday coverage.

NEXT:Loads of Man Utd fans react as 17-year-old sensation called up to England u21 squad

Liverpool are again flying in the league and already building a points advantage on United, who have fallen behind with the loss against Crystal Palace last weekend.

The Reds haven’t been Liverpool since March 2018 under Jose Mourinho, where Marcus Rashford score two early goals to put the game beyond reach.

Jurgen Klopp’s side are a different animal now, however, and Ole Gunnar Solskjaer is in for a tough test to get a result against the title chasers.

A draw would be a good result for United in this game, showing just how much the tables have turned since the dominant Sir Alex Ferguson era.

Our Old Trafford clash with Liverpool has been rescheduled for Sunday 20 October, with kick-off at 16:30 BST. #MUFC pic.twitter.com/LYDOsmCE2n