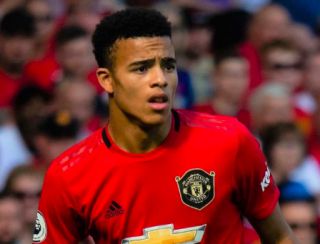 Manchester United youngster Mason Greenwood has been called up to Aidy Boothroyd’s England u21 squad for the European qualifying campaign.

At just 17-years-old, it’s an amazing achievement for Greenwood to receive the call up just three weeks into the season.

Greenwood hasn’t had much game time as of yet in the league early on, but starred during the pre-season tour and is clearly thought of very highly at Old Trafford.

Ole Gunnar Solskjaer trusts the youngster to be his back up striker this season behind Marcus Rashford and Anthony Martial, after no replacement was signed for the departing Alexis Sanchez and Romelu Lukaku.

Solskjaer confirmed his role for the season in his press conference today ahead of Saturday’s game away to Southampton.

“Mason is not used to playing as little as he is,” Solskjaer told the press, as quoted by Manchester Evening News.

“He is used to playing every week, now he is coming on for half an hour here and there. He won’t be expected to play five games on the bounce, he is cover and an option behind Anthony [Martial] and Marcus [Rashford].”

Greenwood is in line to start at St Mary’s with Anthony Martial ruled out of the fixture through an injury sustained in last weekend’s defeat to Crystal Palace.

We can’t wait to see how the academy graduate gets on if he starts tomorrow’s game. Alongside Marcus Rashford, he could be the main goal threat for the Reds in attack.

Loads of United fans were thrilled for Greenwood after his international call up:

Mason Greenwood called up to the England U21s for games next week. #mufc

Things happening so fast for 17 y/o Mason Greenwood, but he just takes it all in stride. He never seems too bothered by the hype or the rapid progress. Congratulations on the call up to England U21's. It should be a great experience for one so young. #MUFC #EnglandU21 pic.twitter.com/iv6D8XNkhj

@_MasonGreenwood go and smash it bro.

MASON GREENWOOD!!! TEARS IN MY EYES WEVE WON THE U21 EUROS!!!

Greenwood moving up to the U21's at the age of 17 is fantastic, so much has happened for him so soon but it doesn't seem to be affecting him at all.

Greenwood x Brewster could be the future for England 👀

This kid is something special pic.twitter.com/WGlAUWoVMT