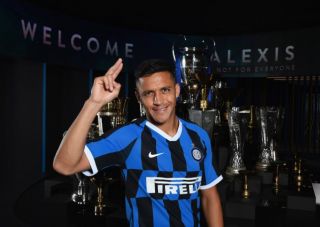 The 30-year-old arrived at Old Trafford in January 2018 from Arsenal and failed to make any impact. As a result, United wanted rid but could only negotiate a season-long loan with the Chile international on astronomical wages.

There were flashes of early promise but they were short lived. Sanchez managed just five goals in 45 appearances since joining the Red Devils.

Sanchez follows Romelu Lukaku by heading to San Siro and the PA news agency understands United will be covering around £6.5m of his wages for the year, as per RTÉ News.

There is not believed to be an option to buy because United feel a good season for Sanchez could see his value rise, though he’s shown nothing to suggest he’ll have a season to remember.

United posted the following on Twitter to wish Sanchez the best in Italy:

We can confirm that Alexis Sanchez joins Inter Milan on loan until 30 June 2020. We wish @Alexis_Sanchez the best of luck in Italy. pic.twitter.com/DdcRQRoEMk

Two weeks ago, manager Ole Gunnar Solskjaer maintained that Sanchez would eventually come good at United. He will face more questions about the former Arsenal captain and his lack of depth in attack at this morning press conference.

Meanwhile, The Guardian are reporting on Chris Smalling joining AS Roma on loan for the season.