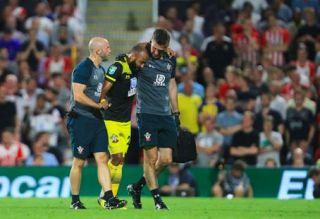 Southampton have been dealt an injury blow ahead of the game against Manchester United on Saturday.

Nathan Redmond suffered an ankle injury in Tuesday night’s Carabao Cup game away to Fulham and was seen with an ankle boot on his left leg after he was brought off at Craven Cottage.

The 25-year-old was in a lot of discomfort, and required a lengthy treatment before he was eventually hauled off the pitch.

Saints boss Ralph Hasenhuttl didn’t confirm Redmond will definitely miss the game at St Mary’s, but the injury looked a serious one and it’s doubtful he’ll be back fit as early as Saturday.

Redmond is a skilful winger who could have caused United problems down the flanks, so it’s a big blow for Southampton to lose one of their danger men.

United also have injury problems of their own ahead of Saturday’s game; Luke Shaw is ruled out and expected to be out for over a month with a hamstring injury (Guardian), and Anthony Martial is a doubt after sustaining a thigh injury in the defeat to Crystal Palace.

It’s still going to be a tough test for Ole Gunnar Solskjaer’s side, and Southampton will be high on confidence after an impressive away win at Graham Potter’s Brighton last time out in the league.

Redmond in an ankle boot on his LEFT LEG as he leaves Craven Cottage. #SaintsFC pic.twitter.com/ddfBWngejw