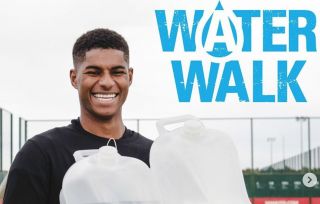 Marcus Rashford was subject to racist abuse after missing a penalty in the 2-1 defeat against Crystal Palace.

The Manchester United striker says he was ‘reluctant to log back in’ after receiving such vile abuse, and nobody can blame him.

It’s the second incident of this kind involving a United player this season.

READ MORE: Who Man Utd can draw in the Carabao Cup third round

United fans responded by bringing an anti-racism flag to Old Trafford at the weekend, though that didn’t stop the keyboard warriors from spreading their bile online.

Following what has happened on social media recently I was reluctant to log back in so soon but @unicef_uk Water Walk is a campaign that can be helped by my platform. If I can help that’s what I’m going to do. Acknowledging this issue is much bigger than acknowledging ignorance… Make your miles count! 🚶🏾‍♂️🚶🏼‍♀️ Join the Water Walk! 💦 Sign up here now: http://unicef.uk/walk #WaterWalk #ForEveryChild