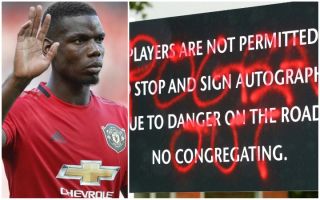 Vandals have sprayed “Pogba Out” on a new sign outside Manchester United’s training ground just days after the French midfielder was subject to racist abuse on social media.

The new sign urges fans to not stop players for autographs but it hasn’t lasted 2 weeks without being vandalised.

The black and white sign reads: “Players are not permitted to stop and sign autographs due to danger on the road. No congregating.”

But this morning a bunch of idiots sprayed “POGBA OUT” across it.

Pogba’s already had to deal with disgraceful racist taunts after missing a penalty against Wolves this season, he doesn’t need to be putting up with more bile.

I don’t think I have ever hated a United player. I’ve certainly disliked a few but imagine going out of your way to vandalise a piece of club property so that the player you’re targeting sees the message?

It’s not right and these people ought to be punished if caught.

On the racial abuse, Pogba himself released a statement on Twitter:

My ancestors and my parents suffered for my generation to be free today, to work, to take the bus, to play football. Racist insults are ignorance and can only make me stronger and motivate me to fight for the next generation. pic.twitter.com/J9IqyWQj4K