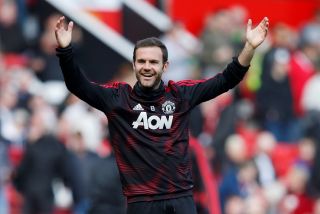 Juan Mata usually releases his weekly blog on a Monday morning but the Manchester United midfielder will now publish his reflection on the past week on Wednesdays instead, starting next week.

I guess it’s different when you’re winning games. Losing games usually results in players having to explain their shortcomings and from reading Mata’s blog down the years, he doesn’t like to go into much detail after defeats. We usually get ‘the fans deserve better’ or ‘we’ll try kick on and set the record straight’.

Talk is cheap unless you can back it up and United haven’t done that since Sir Alex Ferguson retired in 2013.

Reflecting on Saturday’s 2-1 defeat at home to Crystal Palace, Mata wrote: “Defeats are a part of football, although we feel like this one arrived too soon. Fortunately, we have the rest of the season to fix our mistakes and improve.”

Mata has yet to make an appearance for United this season with Solskjaer opting to start Jesse Lingard in an advanced midfield position, despite the England international going eight months without a single goal contribution.

At the end of his blog, Mata mentions a recent interview he did with Jason Burt of the Telegraph. They talked about his recent contract extension at Old Trafford.

Exclusive Juan Mata interview: ‘Playing for Manchester United is a privilege – I want to bring this club back to where it belongs’ https://t.co/oWhS8fBAcY via @telefootball

Here’s why, in his own words, Mata decided to stay at United after months of uncertainty and speculation.

“I told him that given the situation it perhaps would have been easier to leave, to accept that I did not arrived at Manchester United at the best point in their history and not renew. However, I believed, and still believe, that it was worthwhile to stay, to work so that this club returns to fighting for big trophies. I want to be here, working so that Manchester United can get back to what it used to be. This is my mentality and the idea I have in mind. I feel that this was also the mentality of the people who made this great club what it is, and that is why it is so unique and special.”

Mata finished his weekly blog by congratulating United legend Eric Cantona on winning the UEFA President’s Award for his commitment to Common Goal.