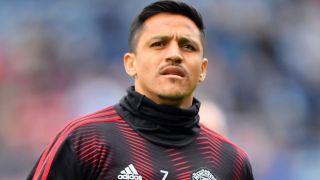 Samuel Luckhurst of the Manchester Evening News says there is a lesson to be learned from the Alexis Sanchez chapter at Manchester United.

Sanchez arrived as a superstar and was given the iconic no.7 shirt.

Like no.7 of recent times, he flopped and there probably won’t be a big deal made out of whoever gets the squad number next.

Hopefully it will be kept for a big signing, though one destined to succeed rather than Sanchez, who is edging closer to joining Inter on a season-long loan.

The MEN reporter calls Sanchez ‘the South American Michael Owen’ not just for being an underwhelming signing, but for helping decide a memorable derby. “That was about it,” Luckhurst concluded.

Lesson learnt from the Sanchez signing is whoever the next #mufc number seven is his arrival will have to be given about as much fanfare as Lee Grant’s. Sanchez was the South American Michael Owen: Helped decide a memorable derby. That was about it.

United shouldn’t rush giving the no.7 to someone else, but instead find the right fit to do the shirt justice.

From Michael Owen to Memphis Depay and Angel Di Maria, it’s been a joke for some time.

Inter Milan will resume talks with United next summer when the season-long loan ends. The Red Devils will hope he performs and they can bump up his value a bit.