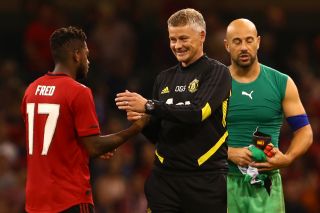 Fred doesn’t plan on leaving Manchester United and has organised additional fitness work in attempt to force his way back into the first-team, according to the Manchester Evening News.

Fred, 26, was linked with a few moves this summer but it looks like his future is based in Manchester despite a challenging first season with the club.

The £52m signing needs to improve drastically if he’s to have a long-term future at Old Trafford. It is claimed in the MEN report that the Brazilian midfielder is working closely with Professor LC Cameron of the Laboratory of Protein Biochemistry in Rio de Janeiro.

While he continues to be overlooked by Ole Gunnar Solskjaer, Fred didn’t get much of a look in under José Mourinho either.

The former United manager is held responsible for bringing Fred from Shakhtar Donetsk. Though it is weird that Mourinho would sign a player for such a transfer fee, when he hardly went out of his way to give him minutes on the pitch.

He is one of five senior central midfielders the manager has to pick from after the same of Marouane Fellaini and departure of Ander Herrera this year. But he will be looking over his shoulder at 18-year-old James Garner, currently excelling for the U23s.

The report adds that Fred has received positive feedback on his training performances, so it’s not all doom and gloom.