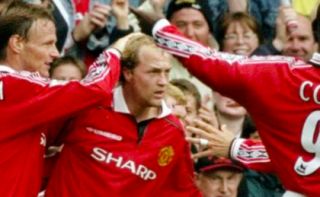 Jordi Cruyff, the son of Ajax and Barcelona legend Johan, has reflected on his three season spell at Manchester United.

The former midfielder joined the Reds in 1996 from Barcelona, after making 41 first-team appearances for his father’s former club.

Cruyff joined the Reds, managed by Sir Alex Ferguson, at the age of 22, but injuries hampered him from starting regularly.

The Dutchman admitted moving to Manchester was somewhat of a culture shock for a player so young.

When you take a step like going to Manchester United you need to be mature enough, and I was probably one year short of that,” he told BBC Sport.

“You have to adapt. It was different, to have dinner at 5pm or 6pm – I’d never seen that.

“I fell from one injury to another and I could never really get a run and show the manager he could count on me. When Ryan Giggs was injured, I was always injured – and that’s my fault. As a coach, you want players who are ready when you need them. I see that now myself.

“Training-wise, I was always on the level that was necessary, but I didn’t play a lot and I probably didn’t bring what I could do in training to the games.”

But Cruyff was not too hard on himself for not playing regularly in such a world-class team that Sir Alex Ferguson was assembling.

“When I look back at that team – Giggs, David Beckham, Paul Scholes, Roy Keane, Eric Cantona, and then the likes of Dwight Yorke, Teddy Sheringham and Andrew Cole – not to have played much is nothing to be ashamed of,” he added.

The Reds won three Premier League titles during his spell at the club, but Cruyff was only eligible to collect one medal as he did not play enough minutes.

It was a golden period at the club during Cruyff’s time, and he was perhaps unlucky not to have featured more given his talent.

But as he notes above, the level of talent competing for a place in Ferguson’s team was extraordinary, and a midfield of Roy Keane and Paul Scholes is always going to be difficult to displace.

Cruyff eventually left Old Trafford in 2000 after his contract expired before returning to La Liga to play for Alavés.

The 45-year-old is now managing in the Chinese Super League with Chongqing Dangdai Lifan.