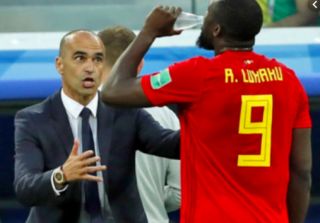 Belgium manager Roberto Martinez has revealed he is pleased that Romelu Lukaku got his move to Inter Milan this summer.

Lukaku joined the Serie A side in a £74m deal (BBC), after expressing his desire to leave United earlier in the transfer window.

And Martinez, who also coached the striker during his time at Everton, believes the move was necessary for Lukaku to challenge himself in new surroundings.

“Romelu needed a new challenge. Sometimes you get bored of a club”

“Working with Conte will please him and the project of Inter, which is to aim for the title, is interesting. I see Lukaku smiling again and that makes me happy.”

Many United fans wanted to see Lukaku go this summer, but the concern now is a lack of goals in Solskjaer’s team.

Anthony Martial’s injury picked up against Crystal Palace on Saturday means the Reds are now light in attacking options, and one thing Lukaku could usually guarantee was goals when given opportunities.

The 26-year-old is a proven goalscorer and it’s baffling that a replacement attacker was not lined up this summer with United knowing about his departure for several weeks before it was finalised.

Lukaku scored on his debut for Inter on Monday night and we expect him to score a hatful of gals in Serie A this season.

debut goal for Lukaku. look how hyped they are for him. 👌🏾👌🏾 pic.twitter.com/gibIi0EMET