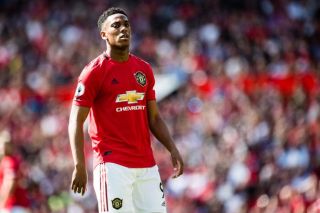 Manchester United manager Ole Gunnar Solskjaer is today expected to learn the full extent of the injuries picked up by Luke Shaw and Anthony Martial in the home defeat to Crystal Palace on Saturday.

The pair both had scans on knocks picked up in the game, and could prove to be huge blows for Solskjaer if the injuries are worse than first feared.

Martial was seen limping after the game and is believed to have picked up a thigh injury.

Shaw’s injury, however, seems more serious than the Frenchman’s, and the Times report that the 24-year-old thinks he could be out for at least a month.

The left-back has come under some criticism amongst supporters after his performances in the opening games, but he will be a big loss given Ashley Young is Solskjaer’s only real viable replacement in the position.

Martial, meanwhile, made a great start to the season with goals in the opening two league games, and is now preferred in the central striker role.

If the Frenchman is ruled out of some upcoming managers, Solskjaer will have to have a reshuffle and Marcus Rashford will likely play centrally with Daniel James perhaps moving to the left.

United face Southampton on Saturday lunchtime, where Young is expected to start in replacement of the injured Shaw.