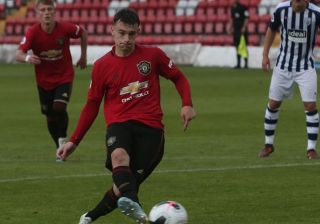 Aaron Ramsey has withdrawn from the Wales squad for the Euro 2020 qualifying matches against Azerbaijan and Belarus next month.

Manchester United teenager Dylan Levitt steps up from the U21 team to replace him in Ryan Giggs’ squad.

An incredible moment for Levitt to be called up the senior squad but this isn’t the first time.

READ MORE: Wan-Bissaka reveals Man Utd star who has helped him settle in at Old Trafford

The 18-year-old has been impressing with the U23s this season and everyone at the club hopes he can develop more this season.

Ole Gunnar Solskjaer will be sure to keep his eyes on the midfielder ahead of next summer’s pre-season tour. If Levitt continues impressing like he has done up until now, he’s destined to be brought away with the first-team.

Much of the focus right now is on James Garner, but Levitt has been equally impressive. Getting some time away with the Wales senior team will do him good.

Aaron Ramsey has withdrawn from the Cymru squad for the upcoming matches against Azerbaijan and Belarus.