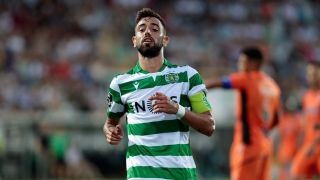 The Portugal international had another fine game last weekend as he set up three goals for his club, while United struggled to break down Crystal Palace at Old Trafford and lost 2-1.

Fans already took to Twitter to complain about the club not signing Fernandes before the transfer deadline for English clubs, with Jesse Lingard currently occupying the no.10 role.

And now there’s another spark to indicate interest from United, as per O Jogo, with Sport Witness translating the report. It claims that Fernandes was scouted by the Red Devils during the recent outing.

The report adds that other clubs such as Chelsea, Leicester City, Bayern Munich and Sevilla were present at the game too, though it’s unclear if they were all watching the same player.

Chelsea were dealt a transfer ban this summer which continues in January, but there’s nothing stopping them from scouting future players. They lost a lot of creativity in the final third with Eden Hazard moving to Real Madrid.

As for United, the Daily Mail has already claimed that United’s scouts were unconvinced by Fernandes this summer. There’s definitely a risk in taking a player from the Portuguese league and expecting him to star – or pull off a similar same goals & assists record – in England, with an expensive price tag (£63m according to the Mirror).

United took their time scouting Victor Lindelof before taking him from Benfica, so I wouldn’t totally rule something out for the future if Fernandes remains at Sporting past the European deadline which is September 2.