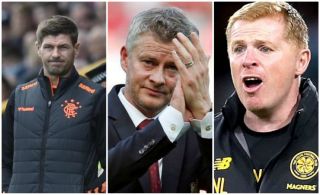 Manchester United will learn who their Europa League group opponents are on Friday.

A clash with Celtic or Rangers is a possibility for United and Arsenal – possibly being their most difficult match of the round.

The two Premier League clubs skip the qualifying rounds for the tournament and jump straight to the group stages.

Arsenal and United are seeded in Pot One of the draw, with both clubs viewing success in the Europa League as a route into next season’s Champions League should they fail to break into the Premier League top four.

Neil Lennon’s side lead AIK 2-0 going into the second leg whereas Rangers drew their opening leg 0-0 with Legia Warsaw.

Facing Steven Gerrard’s side would be a tasty draw for the Red Devils.

Only Bundesliga side Borussia Monchengladbach have booked their place in Pot Two.

PSV Eindhoven are another potentially tricky opponent, but Reds will definitely want to avoid the long trip to Russia to face Krasnodar should they make it through.

We won’t know about the rest until Thursday night.