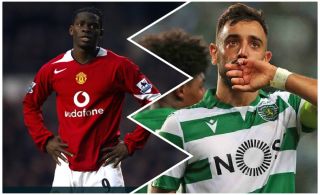 Louis Saha says Manchester United made a mistake not signing Bruno Fernandes during the summer.

United fans jumped to Twitter over the weekend after Fernandes assisted three goals in Sporting Libson’s 3-1 win over Portimonense.

It was a popular view that the Red Devils missed an opportunity to sign a player who would improve the side’s attacking approach, with Ole Gunnar Solskjaer sticking by Jesse Lingard, who hasn’t contributed to a goal in eight months.

READ MORE: What staying at Man Utd could mean for Alexis Sanchez

Saha clearly shares that view judging by his recent interview with Record, as quoted by the Manchester Evening News.

“Bruno Fernandes is a player of great technical quality who could be extremely decisive at various points in United’s game,” the former striker said. “But more than that, he’s a born leader and that’s what Manchester United are missing this season.”

“Only time can tell, but judging from everything that has happened… United made a mistake by not buying Bruno Fernandes and not signing a creative midfield player.”

Saha scored 42 goals in 124 appearances for United, so his comments on United’s attack carry weight.

A report from The Sun in August claimed United failed to see his £63m price tag.

After selling Romelu Lukaku and possibly being without Anthony Martial due to an injury he sustained against Crystal Palace, Solskjaer’s squad could begin to look stretched in the coming weeks.

It was huge mistake to let Lukaku go without finding a replacement to score goals, and now United are relying on two strikers to score 20+ league goals, when both only netted 10 last season.

United are playing a risky game.