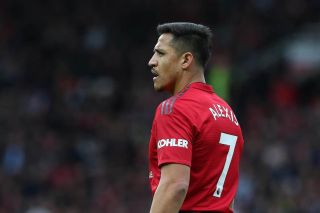 News has emerged from Italy that Alexis Sanchez will join Inter Milan on a season-long loan with an option to buy next summer.

The Chile international becomes the second United player to join the Serie A giants this summer after Romelu Lukaku left Old Trafford for the San Siro earlier this month.

Ole Gunnar Solskjaer runs the risk of stretching his squad with Sanchez about to leave. There’s already question marks over Anthony Martial’s fitness after the France international sustained an injury in Saturday’s home defeat to Crystal Palace.

Fabrizio Ramona of Sky Italia broke the news tonight on Twitter. He’s one of the more reliable hacks when it comes to transfer news, so we’re going to trust him with accuracy on this one.

Fans won’t lose sleep over seeing the back of Sanchez, the highest paid player at United and the club’s all-time biggest flop, though questions will be asked of the Red Devils for not signing an attacking player this summer.

“Alexis Sanchez only scored 3 goals for us, he won’t be missed”

Meanwhile Jesse Lingard who has less assists than a convicted paedophile who hasn’t set foot on a football field in 4 years starts every week.

Love the logic of these people i really do.

Are the people at Manchester United thinking?

Alexis Sanchez to Inter Milan after letting Lukaku go. United stuck with inconsistent Rashford and Martial only… I really can’t wait for when Solskjaer has to come out of retirement to strike for United at some point this season.

We are paying over half of his wages, a loan deal with no obligation to buy. Ed Woodward is a disease. pic.twitter.com/x1lyGVWcKR

People talking like Alexis Sanchez has an ounce of ability left. We can finally start undoing our wrongs

Now that Alexis Sanchez is gone. I don’t want to see anyone wearing the #7 jersey unless they have already proven themselves in a United kit…

That should be locked away unless otherwise…

Alexis Sanchez will go down as THE WORST #MUFC SIGNING OF ALL TIME.

A waste of time and money @ManUtd

Alexis Sanchez > Inter Milan then. No obligation to buy although they’ll discuss a permanent deal once the loan expires, they’ll also cover half his wages in the process. Fair to say it never worked out. Best for both parties.