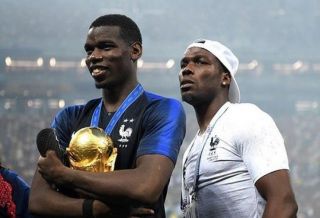 Paul Pogba’s future at Old Trafford has been up in the air all summer with links to Real Madrid and Juventus. The former seem more likely to make a move in a future transfer window, but with just one week left until the European deadline it would be a huge shock if the French midfielder left now.

While the former Juventus star remains silent over his next step, Ole Gunnar Solskjaer is eager to keep the 26-year-old.

There’s no denying that United are a better side without Pogba – their best player by some distance – but some people act as though it would be the complete opposite if he left.

Losing Pogba wouldn’t be a nightmare but knowing the club wouldn’t replace him properly is the hard part. They happily left Ander Herrera and Marouane Fellaini leave this calandar year without a single central midfielder brought in to replace the duo. Neither was considered a star player but we’re now extremely light in midfield as a result.

Pogba’s brother Mathias has shared his thoughts on the transfer situation in an interview with Sky Italia: “I don’t know, I’m not inside Bernabeu. In football, you never know.

“Paul’s very good, as always. No one expects me to say something bad about United. He is a professional and his present is there.

“The future? It depends on the clubs: whether Manchester want to sell and whether Madrid wants to buy. This is business.

“Everyone knows that my brought could use Real Madrid and Zidane. Those who have to talk are Madrid and Manchester United.

“I don’t know what to say… Zidane has always spoken well of my brother, it’s an honour.”