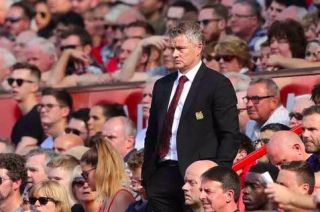 Most Manchester United fans are in acceptance that Ole Gunnar Solskjaer is in need of time at Old Trafford.

The United boss is in the middle of a huge rebuilding job, in which the first building blocks have been put down with the summer additions of Harry Maguire, Aaron Wan-Bissaka and Daniel James.

Saturday’s defeat to Crystal Palace at Old Trafford has reminded some fans of the problems that still remain, and there are still areas within the team that have to be altered and strengthened.

NEXT:‘Nobody cares about Old Trafford’: Pundit says there is no fear factor under Solskjaer

United legend Gary Neville has called for patience from the United board, and thinks the club needs ‘four or five transfer windows’ to close the gap on title chasers Manchester City and Liverpool.

‘The most important thing about the transfer window for United and Ole Gunnar Solskjaer is that they don’t make mistakes, not that they do loads of business, but it’s about making sure they have the right type of players,” he said on the Gary Neville podcast.

“It may seem like too far into the distance but I would suggest four or five transfer windows to get things absolutely right and get back to the type of squad he would want to challenge these Liverpool and Man City teams. I’ve said before, he’s got to be ready, not at the end of this season, not next season, but the one after, to challenge for the Premier League title.

“Potentially when Pep Guardiola has left Man City, or Liverpool have had another round of recruitment and another set of players in…Ole has got to be ready to pounce. It’s a long term thing, there’s not going to be quick fix or magic wand from any manager. United have tried David Moyes, they’ve tried Louis van Gaal, they’ve tried Jose Mourinho, all proven and Ole Gunnar Solskjaer is going down the long road, not the quick path.

“There’s no shortcut, there never is, and for me, it’s now about making it through these difficult moments, like losing to Crystal Palace and you feel like the world is going to fall in that but people must remain patient.

Neville’s right: there’s no fast-lane to success for United and that route has already been tried with serial winner Jose Mourinho.

Ole Gunnar Solskjaer seems to be implementing a style of play at United, but it’s going to take time and there’s too many players in his current squad that are not good enough to challenge for the league.

The Reds still need to prioritise a high quality defensive midfielder, creative attacking midfielder and a replacement forward for Romelu Lukaku in the coming transfer windows.

Solskjaer’s side will hope to get back to winning ways when they face Southampton away on Saturday.