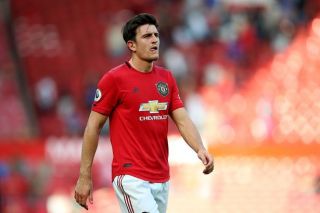 Even though Manchester United have not started the season strongly our new signings have all hit the ground running in their own way.

Aaron Wan-Bissaka looks like a future start at right-back, aged just 21 and bossing that side of the pitch in all three of his games in a red shirt.

Daniel James is a raw talent but has two goals to his name already this season. Not bad for a player just up from the Championship.

But it can be difficult to praise a centre-back when United two sloppy goals against Crystal Palace just three days ago. That said, Harry Maguire has been solid at the back and hardly at fault for many, if any mishaps.

He’s an assuring figure at the back and it will take him time like any footballer to settle at his new club. The other signings and Maguire have all made the bigger moves of their career but fans can have no complaints about their impact thus far.

Portuguese full-back Diogo Dalot has been talking about Maguire to the official club website. You can see his quotes on Maguire below, via United’s latest Instagram update.

🗣️ “He’s a very nice guy, very humble, and he’s settled in perfectly. We’ll keep helping him, but he’s already shown everyone on the pitch that he’s ready for this club.” — @DiogoDalot on @HarryMaguire93. #MUFC

The United dressing room has been subject to lots of criticism for lacking in leaders. Maguire has been tipped as one of those and we can only hope the defender continues to rub off on his team-mates in a positive way.

Although if he feels the need to criticise Dalot and co, he definitely should. That’s what leaders do and we need someone to demand more from the collective group.