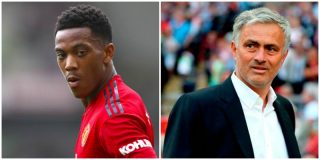 According to a report in the Times, Jose Mourinho repeatedly tried to convince Manchester United’s board to sell Anthony Martial before his sacking.

Martial was often left out by Mourinho in his starting teams, and it was no secret that he did not get on with the Portuguese manager.

The Times report claims Mourinho wanted the Frenchman sold because he was ‘mentally weak’ for a Premier League player, and would be seen sulking when things weren’t going his way on the pitch.

It is believed Mourinho wanted to replace the 23-year-old with Inter Milan winger Ivan Perisic, a more hard-working alternative.

There had been question marks over Martial’s attitude at United, after a quiet couple of seasons after Louis van Gaal left the club.

But Mourinho’s exit and Solskjaer’s arrival in December has given him a reprieve, and he is now fancied by the Norwegian as first-choice striker, a position he favours.

So far, Martial has repaid the faith shown in him by Solskjaer with goals against Chelsea and Wolves in the opening games.

It’s a huge season for the Frenchman to prove he has what it takes to lead the line at Old Trafford, and he has made an encouraging start.

Martial was struggling with a calf injury in United’s home defeat against Crystal Palace on Saturday and is a doubt for this weekend’s away fixture against Southampton.